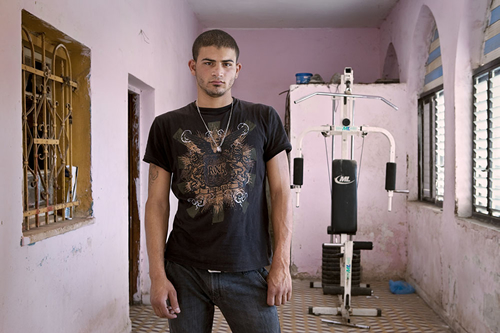 Jehad (Arrabe, Muslim)
I left school a couple of years ago because I wanted to work and make my own living. I work in construction and try to support my family. My dad works in transportation and my mother has a job at the local grocery store. My father is angry with me sometimes if I don’t work for a few days.
I have a few tattoos: my name in English, a crossed-out heart with the name of the girl I love, three dots meaning I am not afraid of the police, and a scorpion because it kills in one stroke. I like to hang out with my guys after work. We either stay around here or go out to the Jewish cities Nahariya and Acre.
Sometimes we get into clashes with the other gang in the village. One of my best friends lost his leg a few months ago in a big fight. The police always take a few hours before getting here. They still haven’t done anything even though we knew and could identify the person who shot him.
All I dream of is having enough money and marrying the girl I love. Her family won’t allow me to see her until I get my act together and stay out of trouble. I do try but somehow it just doesn’t work out. Every nice day I have is followed by ten days of chaos. 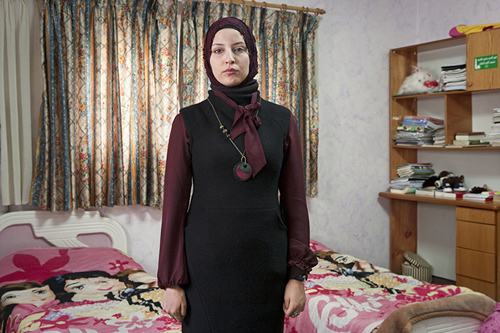 Angham (Kfar Qassem, Muslim)
My father is a high school principle and my mother is an Arab language teacher. Education was always very important in our house. I love to study and hope to do well in the upcoming Israeli SAT exam so I can study in the university. Many Arabs see the exam as discriminatory and choose to study in Jordan instead. I hope to be accepted to physiotherapy studies and make enough money to be able to donate to charity for the construction of a school or a mosque.
I don’t like to watch modern music channels and enjoy only religious programs with preachers explaining the knowledge embodied in the Koran combining faith and studies. The Islam is attacked these days all over the world. The attacks come even from Muslims that try to imitate western lifestyle. Muslim women find it especially hard given the common negative reactions to the hijab (traditional head scarf). Our religion is beautiful and encourages studies, having an order in life, and earning a place in heaven.
I’ve recently gotten engaged and hope to get married in the upcoming summer. This is my first relationship with a man of course, as it is improper for a Muslim woman to meet with a man before there are engaged. I’m very excited and confused by my emotions as I am finally allowed to fall in love. 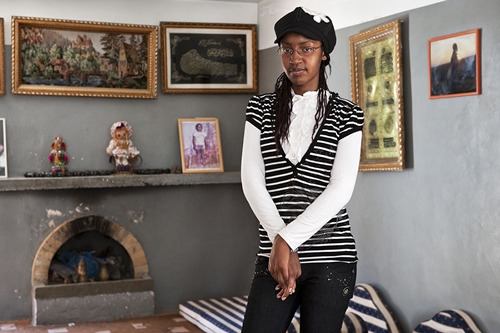 Reeham (Rahat, Bedouin)
The origin of my family of 11 brothers and sisters comes from the Bedouin tribes of Sudan. We live in neighborhoods 7, 11 & 20 in Rahat, the only Bedouin city in Israel. People live in modern buildings and houses, yet many families try to preserve elements of our nomad culture. There are no movie theatres or nightclubs. Men hang out in hookah bars or playing snooker, while women spend their time at home or visiting friends.
When I went to school I used to wear a veil since I wanted to be like all the other girls. I prefer to go around wearing a hat and trousers and don’t see it as a bad thing as most Bedouins. People saw me as a bad person and were surprised to hear about my future plans. Young people in our society struggle between adopting modern lifestyle and preserving our heritage and culture.
My dream is to become a doctor, yet I have to work in order to save money for my studies. I would like to study in Russia, though my brothers recommend I go to England or Jordan. I want to live in a non-Arab country and experience a different culture. It is extremely rare that a Bedouin woman would be allowed to study away from home not escorted by a male family member, so I am very grateful for my family’s support. 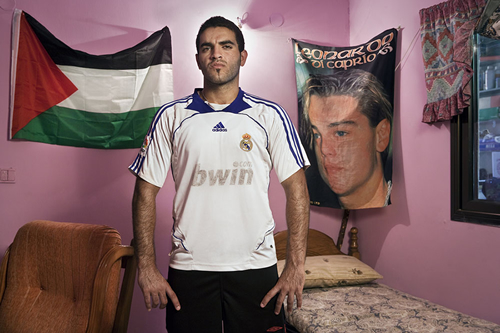 Ehab (Be’ine, Muslim)
I have been playing soccer for as long as I can remember. This is the most important thing in my life. I used to play for HaPoel Haifa in the 2nd Israeli league. A few months ago, I was transferred to HaPoel Beʼine, my villageʼs team. We are in the 4th league, so the level of the game isnʼt as high as I am used to. With hardly any available funds we are forced to make the best of our very basic facilities.
Although this soccer club represents an Arab village, quite a few players on the team are Jewish. I am happy the Jews have to serve in the military, which creates openings on the team. All I can do is continue to play my best and hope I will be able to return to HaPoel Haifa, now playing in the Israeli major league. 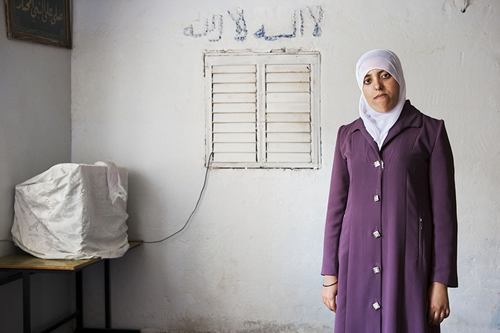 Hanan (Abu Grinath, Bedouin)
I pray to God I will reach heaven in the after life. I am very happy being a devoted Muslim, and enjoy a traditional lifestyle. Still, I feel the women’s role in the Bedouin society is evolving and hope it changes significantly. Until recently we were expected to marry at the age of 18 or even earlier. During the last few years it has become more acceptable for women to get higher education and study at colleges or at the university. We are still obligated to return home every night and can study only at nearby institutions.
I wish to study Communication & Journalism and make a documentary film about my village, which is not recognized by the Israeli authorities. This is my biggest dream. I love watching documentary films on TV and learning about the world. Unfortunately, neither my family’s financial situation nor my level of education would allow for it at this point. I recently applied to an organization offering scholarships for studies of social work or education. Hopefully it will allow me secure a profession in either of these fields, which would enable me to help the community in my village.